Active Directory Infrastructure is depending on healthy replication. Every domain controller in the network should aware of every change which has made. When domain controller triggers a sync, it passes the data through the physical network to the destination.

In active directory environment, there are mainly two types of replications. 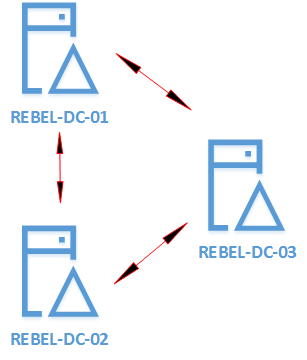 If active directory infrastructure contains more than one site, a change happens in one site need to replicate over to other sites. This is called as inter-site replication and its topology is different from the intra-site replication. Replication with in site is always benefited from the high-speed links. But when it comes to between sites bandwidth, latency and reliability comes to considerations. In previous section, we discussed about site-links, site costs and replication schedules when we can use to control the inter-site replication. 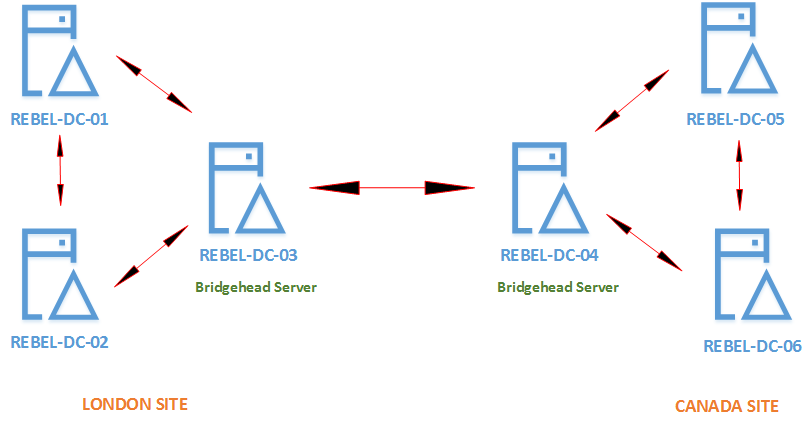 When it comes to inter-site, the replication will happen via site links. The replication with in each site still uses the ring topology. In above example let’s assume an object been added to REBEL-DC-02 in London Site. Now based on the topology it will be advertise to REBEL-DC-03 too. But apart from been domain controller, this particular domain controller is bridgehead server as well. So, it is this server’s responsibility to advertise the updates it received in to the bridge server in Canada Site which is REBEL-DC-04. Once it receives the update it will advertise to other domain controllers in the site. The replication between sites still need to obey the rules which is applied to control the replication. Active Directory domain services automatically selects the bridgehead server for a site. But if need we can decide what should act as bridgehead server for site.

This marks the end of this blog post. Hope this was useful. If you have any questions feel free to contact me on rebeladm@live.com also follow me on twitter @rebeladm to get updates about new blog posts.