Windows 7 and Windows Server 2008 R2 SP1 helps keep your PCs and servers on the latest support level. It also provides ongoing improvements to the Windows Operating System (OS), by including previous updates delivered over Windows Update as well as continuing incremental updates to the Windows 7 and Windows Server 2008 R2 platforms based on customer and partner feedback. This enables organizations to deploy a single set of updates.

The following conditions are prerequisites for the installation of SP1:

In order to make the improvements detailed in this document, various individual files and components have been updated. Also, the language-neutral design of Windows necessitates that the service pack be able to update any possible combination of the basic languages supported by Windows 7 with a single installer, so language files for the 36 basic languages are included in the standalone installer.

For System Administrators, there is a standalone installation package available. However, most home and small business users will receive SP1 through Windows Update. Windows Update utilizes an efficient transfer mechanism to download only the bytes that are needed, resulting in a download that ranges in size from 44 megabytes (MB) to 96 MB depending on the system architecture.

Constraints on the allocation of physical memory represents one of the greatest challenges organizations face as they adopt new virtualization technology and consolidate their infrastructure. With Dynamic Memory, an enhancement to Hyper-V™ introduced in Windows Server 2008 R2 SP1, organizations can now make the most efficient use of available physical memory, allowing them to realize the greatest possible potential from their virtualization resources. Dynamic Memory allows for memory on a host machine to be pooled and dynamically distributed to virtual machines as necessary. Memory is dynamically added or removed based on current workloads, and is done so without service interruption.

Virtual machines running a wide variety of operating systems can use Dynamic Memory; for a complete list, see the "Dynamic Memory Evaluation Guide" at http://go.microsoft.com/fwlink/?LinkId=192444. The guide also discusses Dynamic Memory settings and usage in detail.

Businesses are increasingly looking to leverage the efficiency and cost savings that can come from a virtualized desktop infrastructure. With the addition of Microsoft RemoteFX in Windows Server 2008 R2 SP1, a new set of remote user experience capabilities that enable a media-rich user environment for virtual desktops, session-based desktops and remote applications is introduced. Harnessing the power of virtualized graphics resources, RemoteFX can be deployed to a range of thick and thin client devices, enabling cost-effective, local-like access to graphics-intensive applications and a broad array of end user peripherals, improving productivity of remote users.

RemoteFX can function independently from specific graphics stacks and supports any screen content, including today's most advanced applications and rich content (including Silverlight and Adobe Flash), ensuring that end users maintain a rich, local-like desktop experience even in a virtualized thin-client environment.

Enhancements to scalability and high availability when using DirectAccess

DirectAccess is a new feature in the Windows 7 and Windows Server 2008 R2 operating systems that gives users the experience of being seamlessly connected to their corporate network any time they have Internet access. In Windows Server 2008 R2 SP1, improvements have been made to enhance scalability and high availability when using DirectAccess, through the addition of support for 6to4 and ISATAP addresses when using DirectAccess in conjunction with Network Load Balancing (NLB).

As a greater volume of IT infrastructure migrates to cloud-based services, there is a need for higher thresholds of authentication traffic to domain controllers located on high-latency networks (such as the public Internet). SP1 allows for more granular control of the maximum number of possible concurrent connections to a domain controller, enabling a greater degree of performance tuning for service providers.

Enhancements to Failover Clustering with Storage

SP1 enables enhanced support for how Failover Clustering works with storage that is not visible for all cluster nodes. In SP1, improvements have been made to the Cluster Validation and multiple Failover Cluster Manager wizards to allow workloads to use disks that are shared between a subset of cluster nodes.

Additional support has been added to allow Windows 7 clients to effectively communicate with third-party identity federation services (those supporting the WS-Federation passive profile protocol). This change enhances platform interoperability, and improves the ability to communicate identity and authentication information between organizations.

This tutorial will explain how to install AD on server 2008. This will valid for windows 2008 R2 as well. 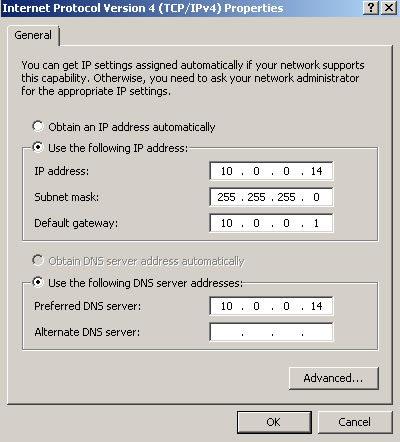 In here the server ip is 10.0.0.14. Since we going to make it as DNS server too you should use the same ip as the preferred DNS server. 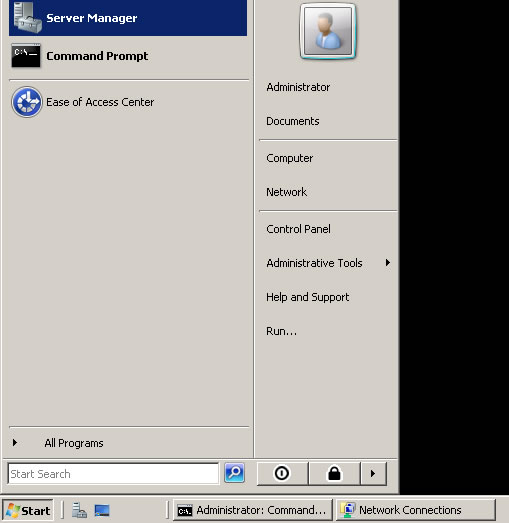 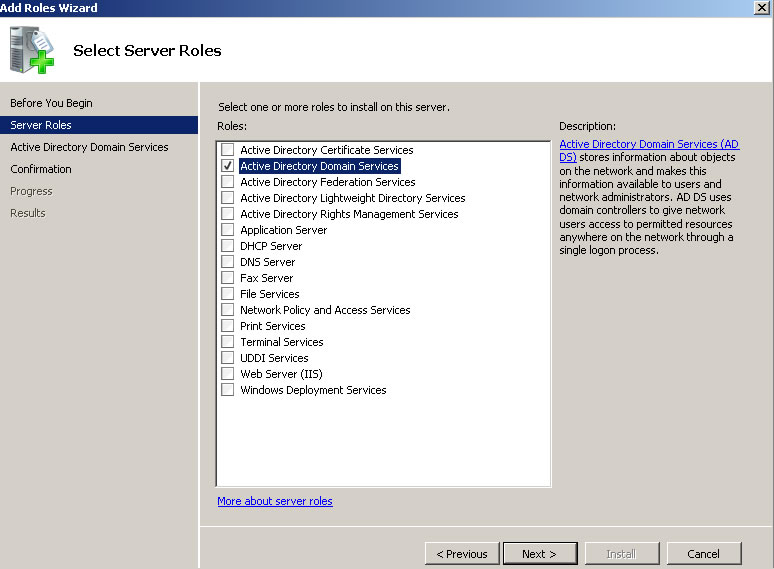 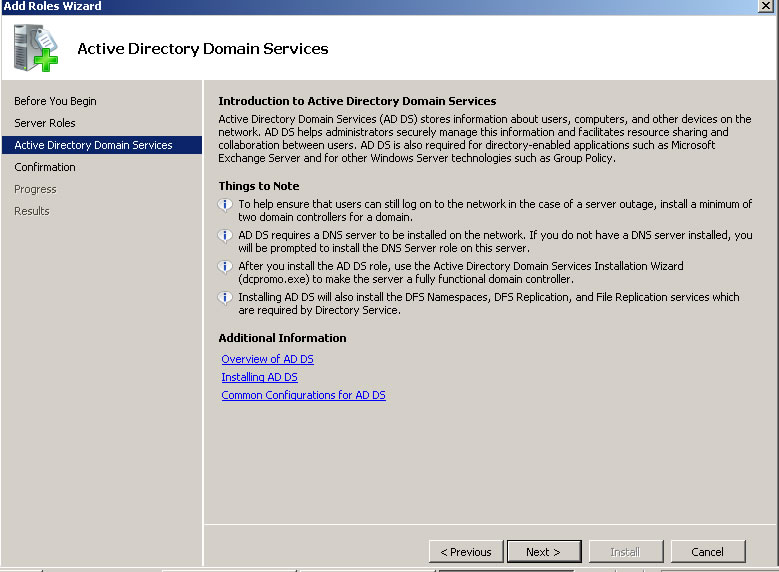 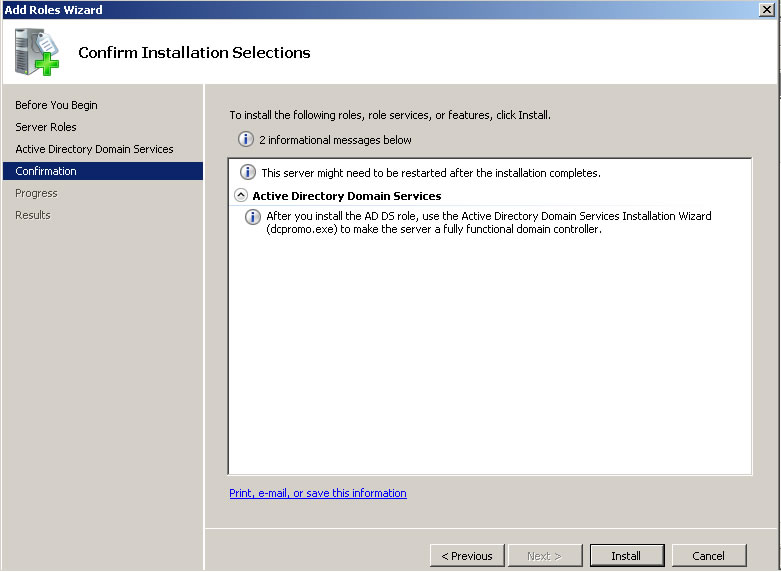 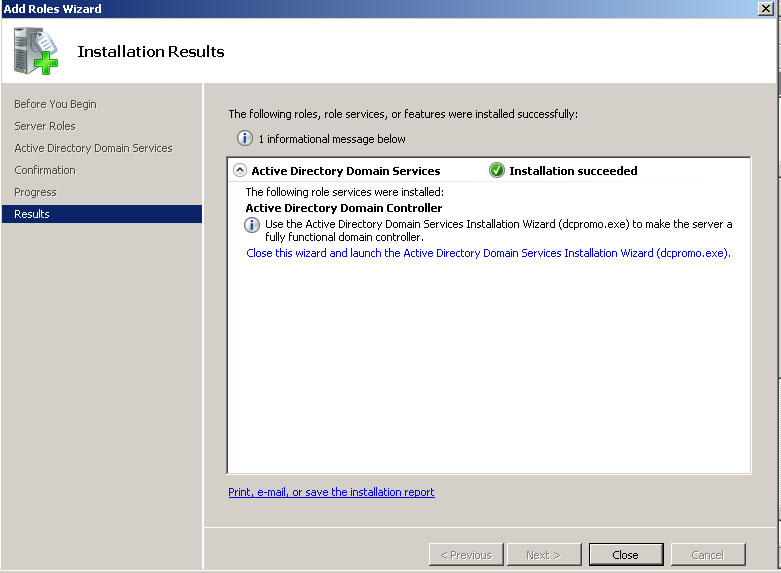 After that you will need to do a reboot. 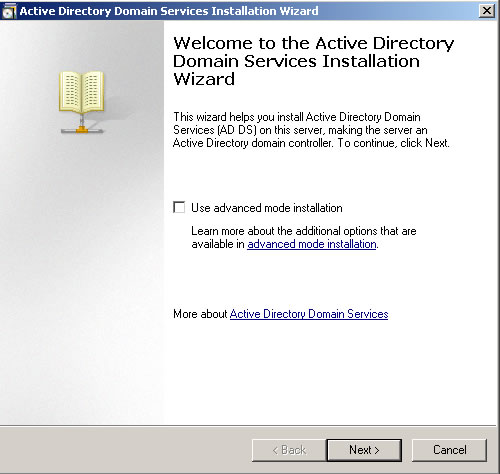 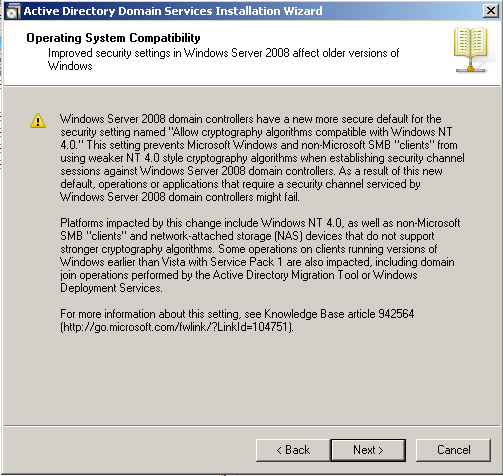 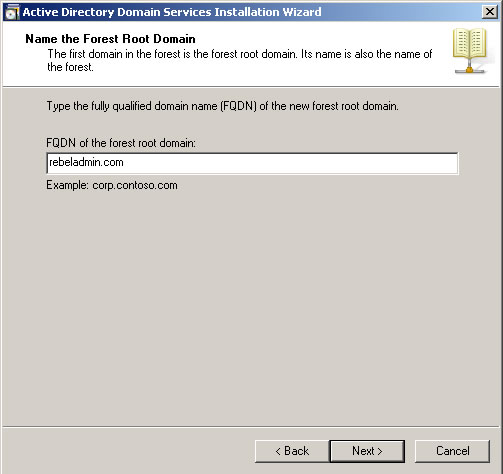 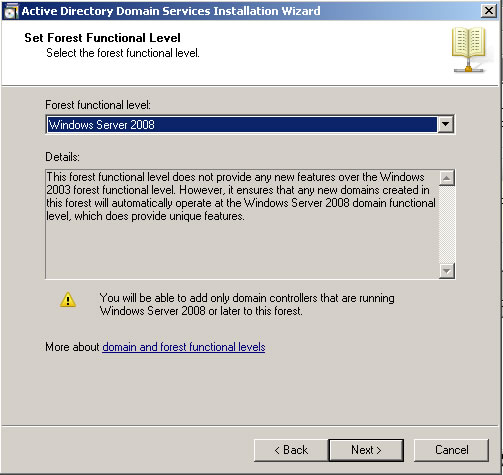 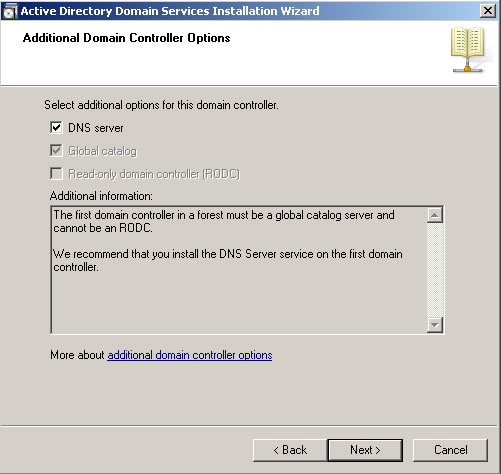 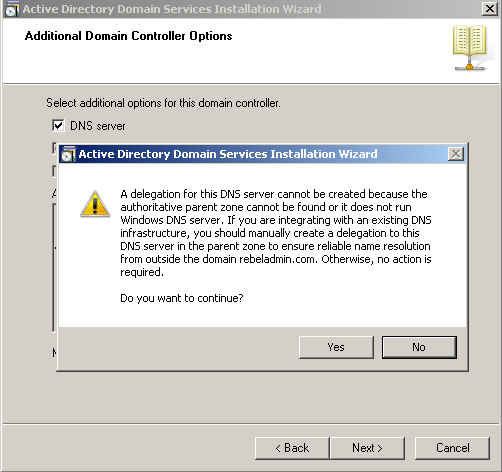 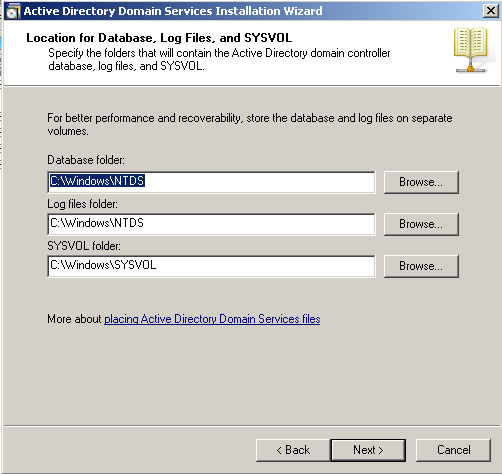 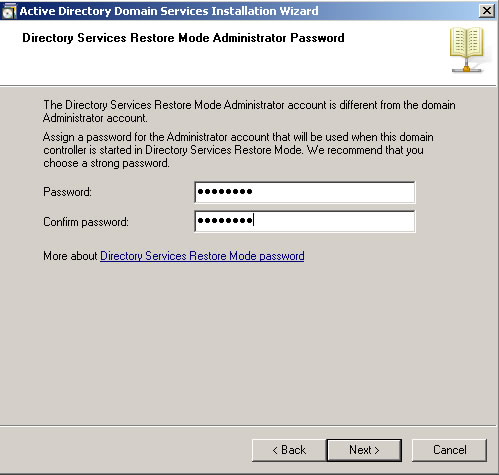 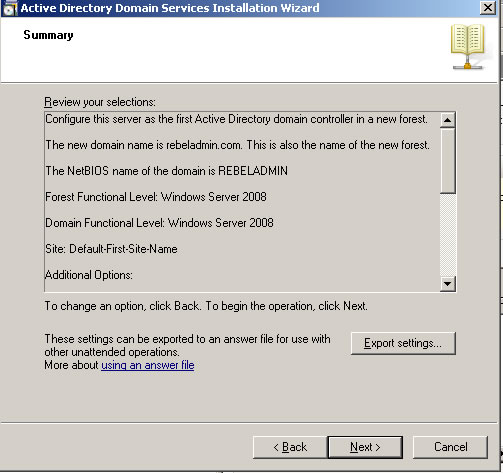 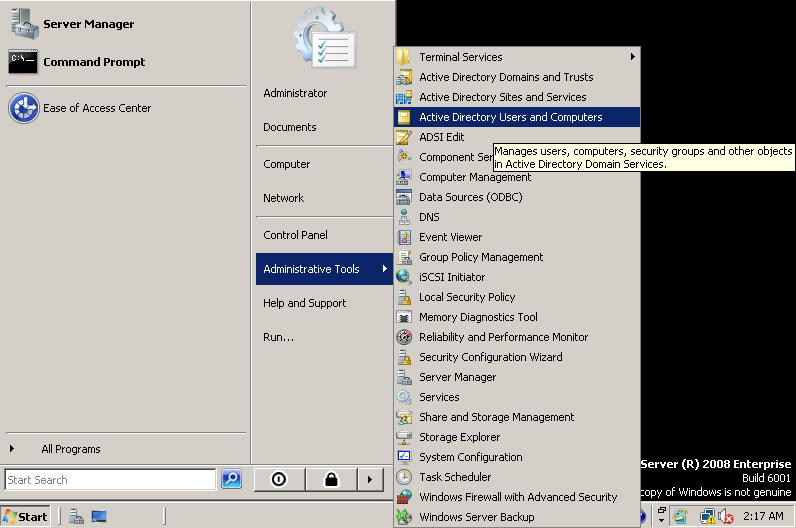 Hope this tutorial is clear for you guys. If any question please ask me on rebeladm@live.com

Windows 2008 core its great creation of Microsoft. It's basically a light version of windows 2008 and comes without all the GUI stuff. There are tools that you can install in core installation and get the GUI. In here I'm going to demonstrate how to setup domain control using Command prompt.

This will show all the network interfaces that available in the server. Please keep note on idx number of the interface that you need to assign the ip in our case its 10

in here I wanted to apply ip address 10.0.0.15 to the interface. Here you can see after the command the server got the new ip address 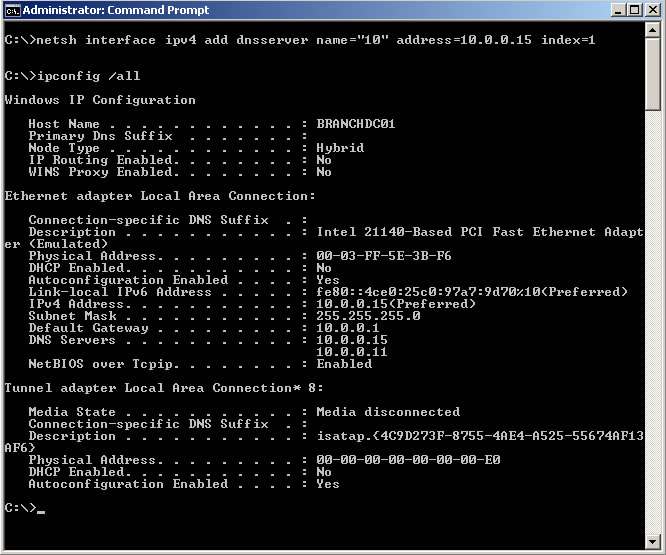 then you need to type the file with the requirement

In here this will install domain rebeladmin.com with DNS 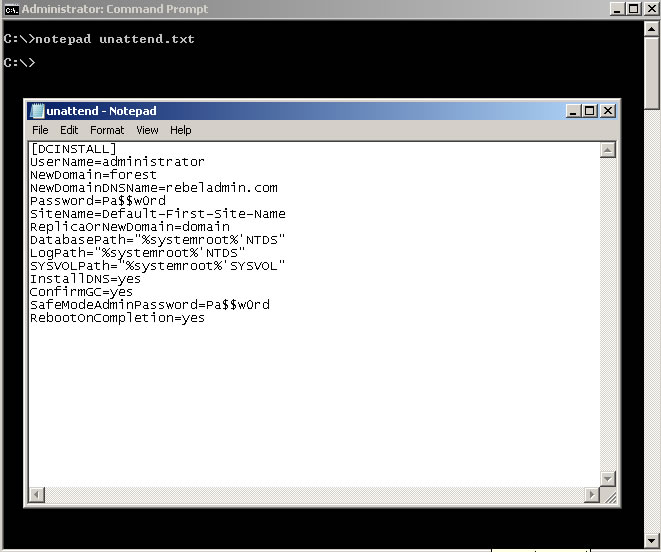 Now we ready for the install. You can execute it from 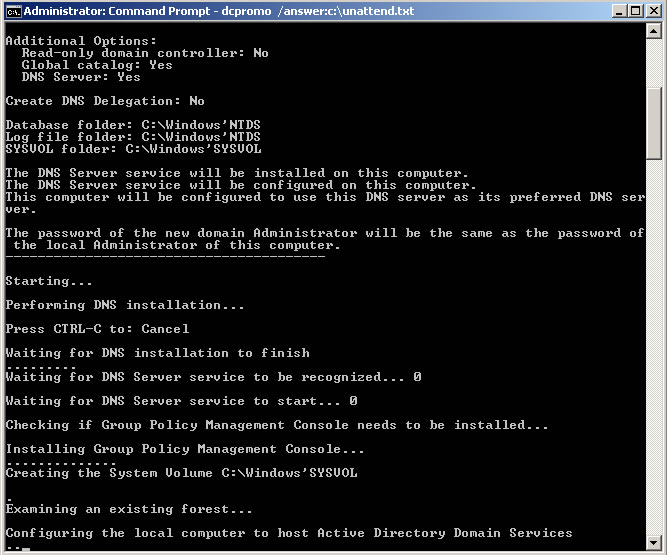 it will take some time to install and after install it will automatically restart. After restart its done. Now you have DC with Server 2008 core.

If you have nay question feel free to ask me on rebeladmin@live.com

When talk about core 2008 the most admin have this issue since that for even easy task like changing hostname it have to everything via command line. When it comes to a task like setup dc with windows core and doing it via command line its much time consuming. In server 2008 R2 Microsoft gave some more help for admins to use some tools. In 2008 r2 you can use "sconfig" to configure the core server easily.

There is lot of 3rd party tools available to help for configuring core servers. In here I'm going to show how you can use Core Configurator 1.0 to setup server 2008 core.

Hope this help you guys. If there is any question feel free to contact me on rebeladm@live.com